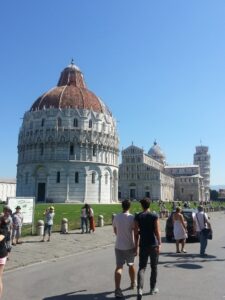 An powerful town during the Middle Ages.  Due to trading links with Spain and North Africa during the 12th century it brought vast mercantile wealth and formed the basis of a scientific and cultural revolution that is reflected in Pisa’s marvellous buildings, notable the Duomo, Baptistry and Campanile (Leaning Tower). The history of Pisa has been tumultuous through the years, the worst being the Allied bombing during WW II. The Leaning Tower was started in 1173, completed in 1274 and started to tilt during construction due to shallow foundations on sandy silt subsoil. Modern engineering interventions decreaded the lean to such an extent that it is now again safe and open to the public.

Dating back to 180BC, Lucca is pleasant to explore on foot since traffic is restricted in the city.

Piazza Napoleane, named after Napoleon, whose sister, Elisa Baciocchi ruled Lucca from 1805 – 1815. Via Fillunga is the main shopping street in the heart of the city, also leading one to the Roman Amphitheatre. Strolling along the ramparts (city walls) is one of the must do’s whilst in Lucca. The city walls never actually had to be defended and was converted in to a public park in the early 1900’s. The beauty of the wide city wall is that it has trees, thus one can walk, stroll, cycle, tri-cycle or run any time of the day with the shade of the trees protecting you from the fierce sun. 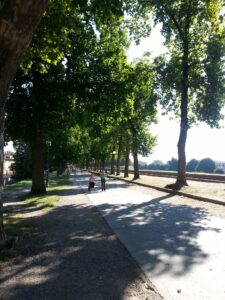 Lucca is a charming town, one can easily spend a few days in Lucca to explore the town and the surrounding areas. Unfortunately I did not have the opportunity to run on the 4.2 km city wall, but this is definitely on my list of things to do during my next visit. Colourful leather purses are very ‘in’ at the moment and I just love my new purse from My Walit, www.mywalit.com My Walit was founded in Lucca in 2005. 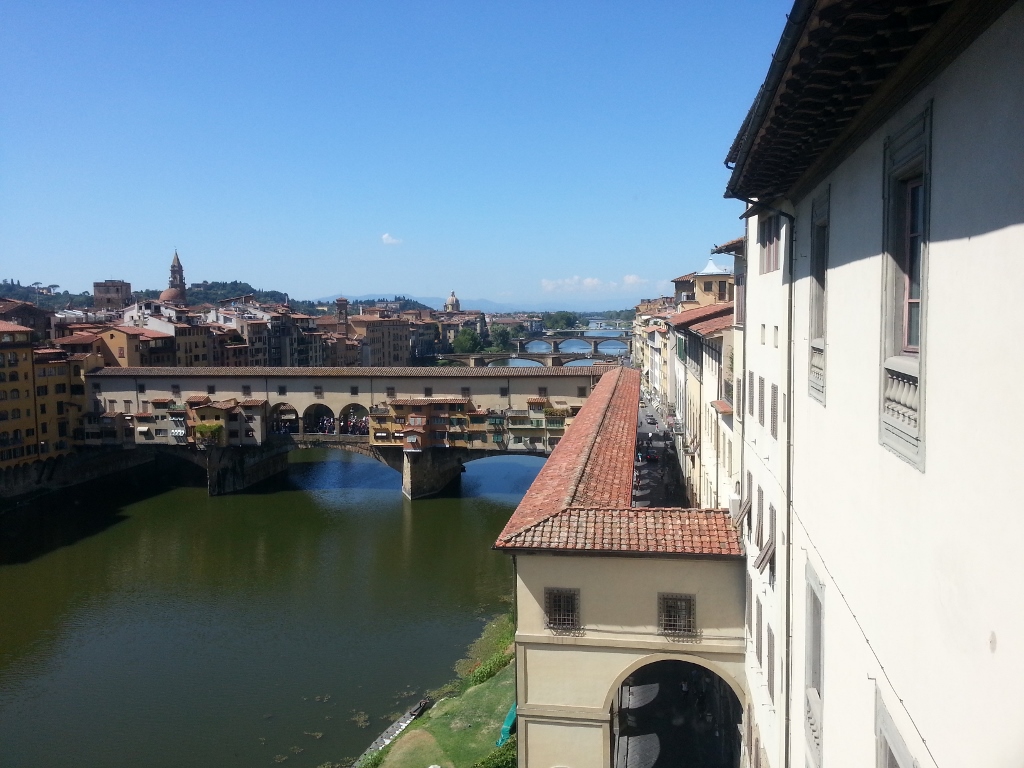 Florence is one of the world’s greatest artistic capitals with famous names such as Botticelli, Michelangelo, Donatello, Dante, Petrarch and Machiavelli. Florence was also home to the influential Medici family up until 1737. The essence of Florence includes the Arno river with the Ponte Vecchio bridge, beautiful terracotta roofs, The Duomo, Uffizi art gallery & Accademia (academy of Fine Arts) housing the spectacular David statue (1504) by Michelangelo.

The Ponte Vecchio Bridge was built in 1345, now with jewelry shops and goldsmiths lining the side. Did you know that the elevated Coridoio Vasariano runs above the shops on the eastern side of the bridge. This passage was built to allow the Medici family to move about their residences without having to mix with the public. This was also the only bridge that survived the destruction of World War ll.

The Uffizi Gallery is also the result of the Medici family. The works of art was collected over many years and has been housed in the Uffizi since 1581. It indisputably contains the world’s greatest collection of Italian Renaissance paintings among many other masterpieces from further afield.

Use the great shopping opportunities in Florence for clothing, leather goods, jewelry, books and gifts. The Florentine designed paper is a favourite.

I am a freelance tour leader for Dobro Travel. www.dobrotravel.com